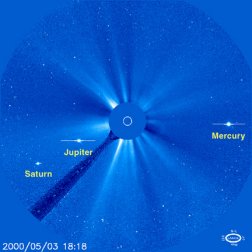 This is the latest image from SOHO. The disc in the middle is blocking out the Sun. The lines on the planets are not rings!
Click on image for full size
Courtesy of NASA

The Solar and Heliospheric Observatory (SOHO) will give us a special treat this month. On May 15, it will capture Mercury, Venus, Jupiter and Saturn together in what scientists call a conjunction. They will all be on the opposite side of the Sun.

You can watch the show on both the internet and NASA TV. The original show was on May 5, but NASA will have updated videos on May 12, and May 15. If you'd rather not wait until then, the SOHO Home Page has some images.