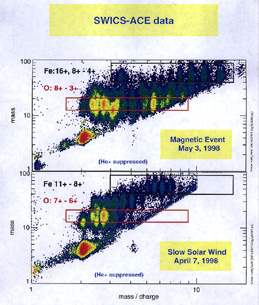 During the last months, there have been more Coronal Mass Ejections (CMEs) than usual. In fact, one such event was recorded just last week by SOHO. Another CME was recorded by the ACE spacecraft on May 3. The ACE satellite measurements show something very unusual about these CMEs.

These explosion events were first discovered in the 1970's. Since they were discovered not too long ago, scientists are still finding out about these CMEs. The ACE satellite found that the CME that passed it last month wasn't made up of material that is all the same temperature. Instead, it was found that the CME was made of an extremely hot region, followed by a cooler region and then another hot region of solar material. This discovery could change what scientists know about CMEs and about how CMEs affect the Earth's environment.

CMEs can definitely affect Earth. They can cause strong geomagnetic storms, aurorae or electrical power blackouts. So we need to know when these CMEs are coming. That is why we have spacecraft like ACE. The ACE satellite serves as a spaceweather station while in orbit. ACE can provide about one-hour advance warning of any major geomagnetic storms.