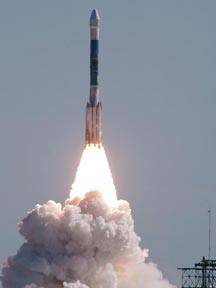 Deep Impact has two parts. One part will fly by the comet. The other part, called an "impactor", will crash into the comet! The impactor will make a crater as big as a football stadium on the comet. Scientists want to see what the insides of a comet are like. The flyby part of Deep Impact will take pictures before, during, and after the crash.

Deep Impact will get to Comet Temple 1 on the Fourth of July, 2005. The comet is named after Ernst Tempel, who discovered it in 1867. Comet Temple 1 goes around the Sun once every 5.5 years.

Not long ago, many people thought that comets were a sign that something bad was about to happen to them. People didn't understand how objects in the sky moved, so the sight of a comet must have been...more