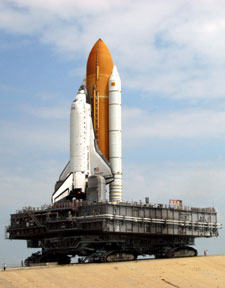 Space Shuttle Discovery, along with its Mobile Launcher Platform, is hauled to Launch Pad 39 B at Kennedy Space Center in Florida by a gigantic Crawler-Transporter vehicle in July 2005.
Click on image for full size
Image courtesy NASA.

NASA is preparing to launch a space shuttle for the first time since the tragic accident that destroyed the shuttle Columbia in February 2003. Discovery, one of the three remaining shuttle orbiters, is scheduled to lift off from Kennedy Space Center in Florida at 3:51 PM Eastern Time on Wednesday, July 13, 2005.

NASA made numerous changes to shuttle safety procedures in the 2+ years since the loss of Columbia and her crew. Discovery will carry a new orbital inspection boom, separate from the shuttle's usual robotic arm, in her payload bay. Much of the upcoming 12-day mission is dedicated to testing the boom and other new tools and procedures that might allow astronauts of future shuttle flights to repair their spacecraft in orbit if it was damaged during launch. Damage to Columbia's thermal protection system during liftoff led to the destruction of that shuttle during re-entry.

Discovery will also deliver much-needed supplies to the International Space Station (ISS) during the mission. Discovery will take a replacement gyroscope to the space station, along with food and other supplies in an Italian-made cargo carrier called Raffaello. It will also deliver an external storage platform that will be used on upcoming flights to continue assembly of the ISS. Russian Soyuz and Progress spaceships have been used to ferry crews and supplies to the ISS while the shuttle has been grounded, but are unable to haul large objects like the gyroscope and the storage platform.

Eileen Collins is the commander of this critical shuttle mission, and James Kelly will serve as Discovery's pilot. Rounding out the shuttle's crew of seven astronauts are mission specialists Andrew Thomas, Soichi Noguchi, Charles Camarda, Wendy Lawrence and Stephen Robinson.

If new safety concerns or other problems arise, NASA has until July 31st to launch this mission in the current "launch window". New rules concerning lighting and NASA's ability to photograph the launch in great detail, so that the space agency could detect problems like those that damaged Columbia during liftoff, dictate the duration of the launch window opportunity. If Discovery cannot be launched by the end of July, the next opportunity to send the shuttle aloft occurs in September.

We at Windows to the Universe are deeply saddened by the deaths of the Mission STS-107 astronauts, who tragically lost their lives on Saturday February 1, 2003 when the Space Shuttle Columbia broke apart...more

NASA launched the Deep Impact space mission at 1:47 PM Eastern Time on January 12, 2005. Deep Impact was lifted into space from the Cape Canaveral Air Force Station in Florida aboard a Delta II launch...more

NASA is preparing to launch a space shuttle for the first time since the tragic accident that destroyed the shuttle Columbia in February 2003. Discovery, one of the three remaining shuttle orbiters, is...more