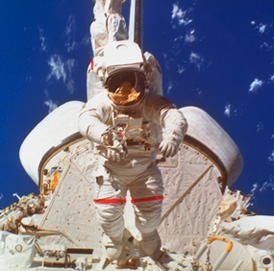 Most of us don't think twice about walking outside on a sunny day, getting in the car and driving to our favorite picnic spot. But not everyone has that freedom. In fact, some children with rare skin diseases can't even venture out to their backyard except at night.

For the first time in his life Mikie Walker stepped out into his backyard during the day. Mikie, who is 6-years-old, became the first American child to receive a "space suit" that protects him from the Sun. Mikie has porphryia, a disorder that means Mikie's skin can't be exposed to any sort of light. Without his new "space suit" based on NASA technology, Mikie would never have been able to go outside to play during the day.

"It's amazing to think that NASA astronauts having walked on the Moon means a child now can play in the sunlight," said Sarah Moody, president of the HED Foundation, which donates cooling gear to children with hypohidrotic ectodermal dysplasia (HED) and other genetic disorders. Through the help of NASA and the HED foundation, two more English children have received spacesuits and many more children have received cooling vests so they can go outside and play.