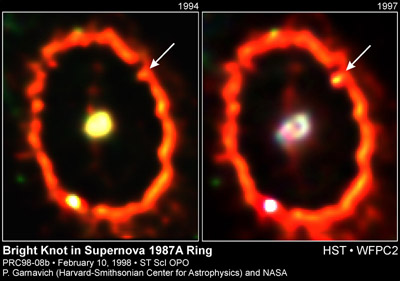 The supernova explosion was first observed on February 23, 1987. Although the star actually blew up in about 165,000 BC, the light from the explosion had just arrived at Earth. This is the closest supernova to Earth in 400 years.

The ring of gas around the explosion was formed before the star exploded. As the debris from the supernova hits the ring at extreme speeds, the temperature of the ring increases from a few thousand degrees to a million degrees Farenheit! In a few years, the entire ring will have lit up. The lit ring is expected to also light up the space around it, shedding light on objects that were previously too dark to see.

Astronomers are expecting to be able to answer questions about the supernova's past, such as what type of star caused the explosion, and explain things about the strange gas rings surrounding the supernova.