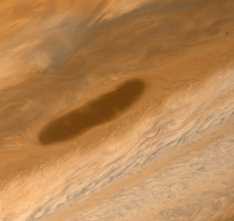 This is an image of a brown barge.
Click on image for full size
NASA

This is a picture of a brown barge. The accompanying clouds, next to the barge, look very similar to earth clouds.