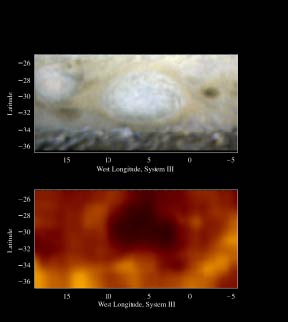 Among the cloud features in the atmosphere of Jupiter are white ovals. White ovals are a collection of many white clouds which are grouped together into an oval shape. They are found at almost any latitude and longitude of Jupiter. Though the oval is made of clouds, the oval itself can have a diameter of more than 9000 km (that is, 3/4 the size of the entire Earth since the Earth has a diametet of 12,000 km). White ovals can survive a long time as a structured feature in Jupiter's atmosphere, although they change their shape, migrate through the atmosphere, jostle each other for position, and even eventually merge with each other. White ovals have been known to survive for 40 years or more. That is a much shorter time than the Great Red Spot, which is at least 400 years old, but much older than any cloud feature found on the Earth.

The clouds circulate around the center of the oval, much the way a hurricane circulates around the eye. More importantly, ovals are anti-cyclonic systems . This means that the air spins in the counter-clockwise direction, and the air in the oval is rising (updrafts), when they are in the southern hemisphere.

Although there are other white ovals in Jupiter's atmosphere, in recent decades there have been 3 which are considered to be classics. They are classic because they have been so long lived. They are named FA, DE, and BC, and they were born in 1939. You may ask, "where did the scientists get those awful names?". These three ovals have had a unique history which has lead to the names by which they are known today. After such a long time, two of the ovals, BC and DE, recently merged together (1998). What do you think scientists might name the newly merged oval: perhaps ABCDEF? Scientists have decided to call it BE.