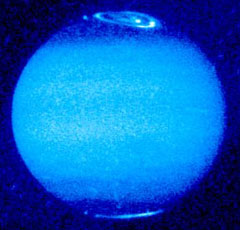 Jupiter has interesting poles. The poles of some of its large moons are interesting too. Io is one of the big moons. Io has volcanoes near its poles! The other big moons are covered with ice, like Earth's polar regions.

When radiation particles hit gases in Earth's atmosphere, the atmosphere glows. That's what causes the "Northern Lights" (also called the aurora). Jupiter has aurora too. They form over both of Jupiter's poles.

The Layers Inside of Jupiter