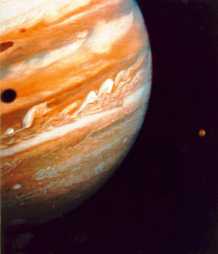 The king of planets is aptly named because it not only has the most dymanic atmospheric motion, but also the most riveting cloud patterns and storms, and the most majestic appearance of the giant planets.

The atmosphere of Jupiter is only a narrow surface layer, compared to the vast interior of the planet. The three clouddecks of Jupiter are to be found at different levels in the , while hazes of smog can be found higher in the atmosphere.

Jupiter is not much changed from its early evolution out of the early solar nebula, and in fact, may still be forming!