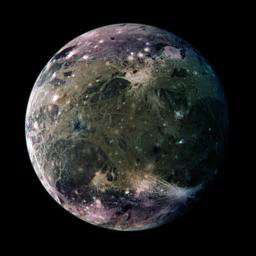 Ganymede was first discovered by Galileo in 1610, making it one of the Galilean Satellites. Of the 60 moons it is the 7th closest to Jupiter. It is the largest moon in the solar system, much larger than the Earth's moon, with a diameter that is about the distance across the United States.

Jupiter is the biggest planet in our solar system! It's also very bright in the sky. We don't know who discovered it, but we do know the ancient Greeks named the planet after the god, Zeus. The United...more

Did you know that some of the planets and moons can be magnetic? Earth is! The Galileo spacecraft found out that a moon of Jupiter, Ganymede, is magnetic too! ...more

The Galileo mission discovered an amazing thing! Europa has its own atmosphere, although it is very, very thin. When fast moving molecules traveling through space near Jupiter hit Europa's atmosphere,...more