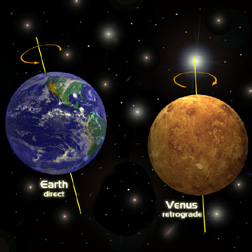 It depends on what kind of motion you are talking about. When seen from the north pole of the celestial sphere all planets orbit around the Sun in a counter-clockwise or direct path. Most planets also rotate on their axis counter-clockwise. A few, Venus, Uranus, and Pluto, rotate clockwise and this is known as retrograde motion.

Venus has a very slow rotation (117 Earth days) on top of being retrograde. Scientists think that Venus originally had direct rotation, but that some ancient collision or other phenomenon reversed the rotation. This could also account for why Venus rotates so slowly.