Can you blow bubbles in space? 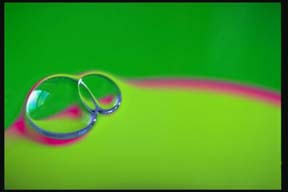 Bubbles are pretty neat, aren't they? You can blow bubbles from a special little wand and watch them float around in the air until... *POP* ...they're gone! What happened?

When you blow a bubble, you are pushing air onto the bubble's soapy surface. The pushing of air in scientific terms is known as 'pressure.' Near the surface of the Earth, there are a lot of air molecules pushing on each other. So the pressure near the surface is high. As you go higher in the atmosphere, there are less and less air molecules, so the pressure gets lower.

In space, there is no pressure. There are no air molecules in space to push anything. So if you try to blow a bubble in space nothing will happen. The air molecules inside the bubble have nothing to push against so the bubble will pop before it starts to form. The bubble can only exist when there is equal pressure inside and out.