Why is Jupiter called a gas planet? 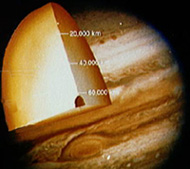 If you were to fly to Jupiter, exit your spacecraft, and try to step onto the surface of the planet - you couldn't! This is because Jupiter is not a solid planet the way the Earth is.

Let's take an imaginary trip to the center of Jupiter. Get back into your spacecraft and let's see what you would find! First, you could look at many colored clouds. These clouds are part of Jupiter's thick atmosphere which is made of up gases. It is much bigger than the Earth's atmosphere! This is the reason that Jupiter was first called a gas planet.

If you made it through the clouds and any storms that happened to be stirring at the time, you'd come to a big layer of l iquids. This is actually the biggest layer of the planet Jupiter. It is so big, that some scientists call Jupiter a "fluid planet" instead of a gas planet! If you got your windshield wipers going hard enough to make it through all of those liquids, you 'd come to a small core made up of ice and rock. You could camp here for the night or you could stop by one of Jupiter's many moons!