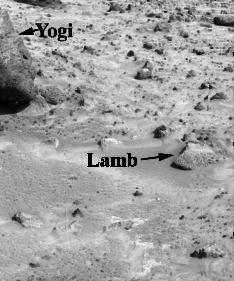 The Lamb.
Click on image for full size
Image from: NASA/JPL

The small, round rock shown here was named The Lamb. It was found as part of Mars Pathfinder's investigation of the surface of Mars. This rock is special because of the soils found around the rock. They seem to be made of a special sort of iron which requires more water than is presently seen on Mars. This finding could show that in the past, Mars was warmer and had more water. This would help answer large questions scientists have about Mars. Perhaps there was enough water to actually rain on the surface! 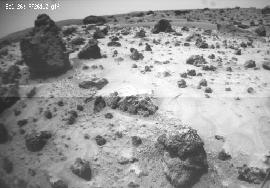