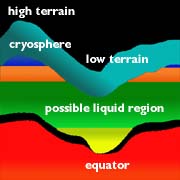 This drawing shows a cross-section of the Martian frozen ground.
Click on image for full size
NASA

The figure shows a crossection of the crust, and the unusual altitude variation of the Martian surface. The figure illustrates the depth of frozen ground at various latitudes, called the cryosphere, as well as the depth to which the aquifer, or layer of liquid water, may exist across the planet. To have liquid water running on the surface of Mars, the aquifer, or liquid region, must be exposed to the surface. This may have happened at various times in the history of Mars as the climate changed.