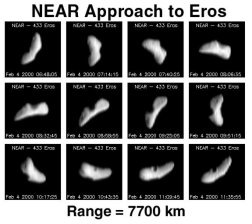 The Near Earth Asteroid Rendezvous (NEAR) spacecraft is the first one to ever orbit an asteroid. NEAR was launched in 1996, and finally reached Eros on February 14, 2000. On its way to Eros it flew by asteroid Mathilde for a quick look.

Eros is one of the largest asteroids near Earth. It was discovered in 1898. Eros is large enough to have a small gravitational pull, which allows NEAR to stay in orbit. The mission was one of the first to be a part of the Discovery Program, a low cost exploration program set up by NASA.

NEAR has six instruments that it will use to study Eros. An imager will take photographs, a magnetometer will search for a magnetic field, and spectrometers will analyze the asteroid's makeup. The goals of the mission are simple; learn as much as we can about these miniature planets.