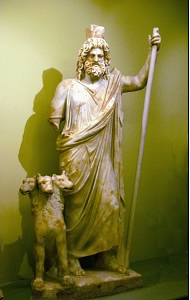 Hades and Cerberus, his three-headed dog, in the museum of Archeology in Crete.
Image courtesy of Aviad Bublil. Creative Commons Attribution 3.0 Unported license.

Following the defeat of the Titans by the Jovian gods, Pluto obtained the kingdom of the underworld. One day, while he was riding through the field of battle, the goddess Venus had her companion, Cupid, playfully shoot an arrow into the heart of Pluto.

Struck by Cupid's arrow, Pluto fell in love with the first young lady he saw, who happened to be Persephone. Pluto promptly carried her off into the underworld to be his bride.

Dead souls were escorted to the shores of the River Styx by Mercury , where they were received by the boatman Charon, who rowed them across the River Styx to Pluto's kingdom.

Many characters throughout Roman myth crossed the path of Pluto. Ulysses, the famous greek hero, entered the realm to speek to lost souls. He spoke to his dear friend Tiresias, who told him his destiny. He also came across his dead mother, Anticlea, and the great warrior, Achilles. Ulysses was the only one to successfully make a trip to Hades and return to Earth.

Persephone was the Greek goddess of the Underworld and the wife of Hades. Hades fell in love with her after seeing her picking flowers in a plain in Sicily. He decided at once to abduct her and carry...more

Igneous rocks form when molten rock cools and solidifies. Molten rock is called magma when it is below the Earths surface and lava when it is above. There are two types of igneous rocks, depending on...more