According to Navajo Native Americans, Estsanatlehi, whose name means "Changing Woman", created the first man and woman from pieces of her own skin. She is the wife of the Sun god, Tsohanoai and the mother of the two Navajo heroes, the twins Nayenezgani and Tobadzistsini.

Her home is on an island far to the west where Tsohanoai meets her every evening as he sets. She is said to become old each winter and to rejuvenate each spring. This curious peculiarity is related to the changing of the seasons.

It is believed that Estsanatlehi eventually became the goddess of the underworld. 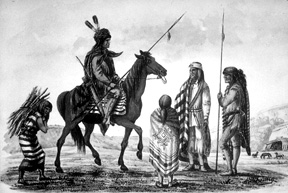 For the Navajo Indians of North America, Tsohanoai is the Sun god. He has human form and carries the Sun on his back everyday across the sky. At night, the Sun rests, hanging on a peg on the west wall...more