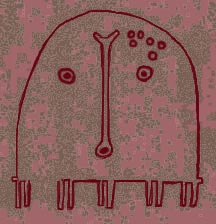 Sketch of the face of Black God, the Navajo sky god who is depicted as a sky map with a crescent moon on his forehead, the sun as his nose, and the line between them would represent the ecliptic where the Pleiades appear.

The Flint Boys is the name that Navajo Indians give to the Pleiades. According to a Navajo myth, after the Earth was separated from the sky, Black God had a cluster of seven stars on his ankle. People questioned the meaning of these stars.

Black God stamped his foot several times, and each time the Flint Boys jumped up to reach first his knee, second his hip, third his shoulder, and finally his forehead which appeared to him the most appropriate place where the Flint Boys should remain forever.

This episode revealed to everybody that Black God was in charge of the sky. In fact, today, we still can see the Flint Boys, namely the Pleiades, high in the sky in autumn and winter.

It is also told that the Pleiades originated from the story of the Changing Bear Maiden. A girl changes into a bear and kills all the children she is playing with. Fortunately, her little sister escapes, and along with six hunters becomes the Pleiades.