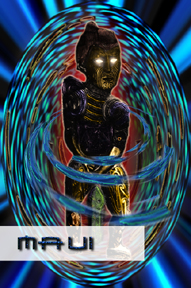 Maui was a hero of Polynesian mythology. For Maui and his mother the days were too short. Maui wanted his mother to have more daylight to make bark cloth. He thought that if the Sun were moving slower across the sky, there would be more hours of light in one day.

So, Maui cut off the sacred tresses of his wife, Hina, to make a rope that would not burn in the Sun. With his rope he caught the Sun as it was rising and beat it with the magic jawbone of his grandmother.

The Sun was so weak after the beating that it could not run but only creep along its course. In this way, sunlight lasted longer, and it was possible to work more during the day.