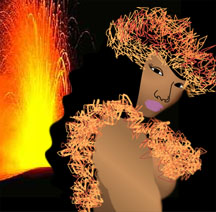 Pele is a fire goddess according to the people of Hawaii. She is savage and wrathful and resides in the crater of the volcano Kilauea. It is said that one day Kamapua'a, a pig god of Hawaii mythology, sought in marriage the fire goddess.

As a result, the two deities found themselves involved in a fight. Pele's followers threatened to burn Kamapua'a with flames. Kamapua'a attacked the crater with fog and rain. Finally, Pele yielded, and Kamapua'a succeeded.