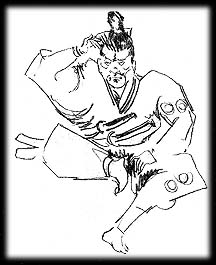 According to the ancient Japanese religion Shinto, Susanowo was the god of the sea and the storms. Susanowo had a furious and impulsive temper. He could create violent storms that could cause tremendous damage.

Once his sister, the Sun goddess Amaterasu, was so hurt by his fierce temper that she decided to hide herself in a cave, closing the entrance with a huge stone. Amaterasu was the goddess of light. Because she was in the cave, darkness fell over the world.

The gods made Susanowo leave. After this, Susanowo had to overcome many dangerous adventures. He killed a giant snake with eight heads and found a sword inside it. After many journeys, Susanowo went to live with his mother Izanami in the underworld.