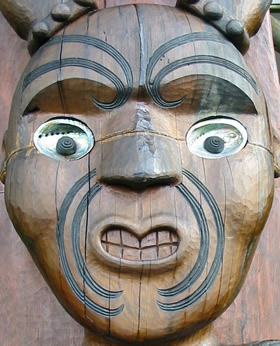 Tawhiri was very angry with his brothers. They disagreed about whether their parents, Rangi (the sky) and Papa (the Earth), should be separated.  His brothers won, sky and Earth were separated. Thats why Tawhiri was so angry.

Tawhiri was the god of wind and storms, so when he got angry, the weather got stormy.

From his place in the sky he sent thunderstorms and hurricanes to one of his brothers who was the god of forests. The tall trees of the forests cracked and fell.

He sent storms over the oceans to another brother who was the god of the sea. Waves and whirlpools of water rocked the oceans.

He sent storms to two other brothers who were the gods of food. These brothers were protected by their mother the Earth.  She held them close and they were not harmed by the storms Tawhiri sent.

The last brother, the god of fierce humans, withstood the wind and storms that Tawhiri sent.

The story of Tawhiri and his family comes from the Maori people from New Zealand and eastern Polynesia.