This is an image of the surface of Mercury.
Click on image for full size
NASA

Early Cratering of the Planets

When we look at images of many of the planets, we see all sorts of circular craters on the planet surfaces. Most of these craters were probably formed when the solar system was still very young.

Once the early solar system had planets about the size of the planets today, there were still probably a lot of smaller bodies around, too. The gravity of the large planets would attract nearby smaller bodies, which would hit the planets and leave a crater on the planet's surface.

Craters on the surfaces of the inner planets are up to 4 billion years old, and some craters seem to have been made by objects up to 200 km across! 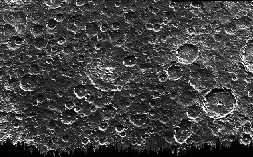 Exploratour - The Surface of Europa

Scientists usually use craters to judge the age of a surface. The more craters the older the surface is. (That is because on an active planet, the surface turns over with time and wipes out the craters....more

Eris is a dwarf planet in our Solar System. Eris was one of the first three objects classified as a dwarf planet, along with Pluto and Ceres. Eris was first spotted in January 2005. Eris is a large sphere...more

Do you know what a planet is? If so, you are doing better than professional astronomers! Right now astronomers aren't quite sure how to define a planet. Maybe you've heard that some astronomers think Pluto...more

The Orionid meteor shower happens every year in October. Meteor showers are times when you can see many meteors or "shooting stars" in one night. There are several meteor showers each year. Most meteor...more

The Leonid meteor shower is one of several major meteor showers that occur on roughly the same date each year. The Leonids typically "peak" (are at their greatest level of activity) in mid to late November....more