Shown here are four representations chemists use for carbon monoxide. In the colored models, carbon is light gray and oxygen is red.
Click on image for full size
Windows to the Universe original artwork by Randy Russell.

Carbon monoxide is a colorless, odorless, tasteless gas. It is also flammable and is quite toxic to humans and other oxygen-breathing organisms. A molecule of carbon monoxide (CO) contains one carbon atom and one oxygen atom.

Carbon monoxide is a relatively unreactive compound, so it doesn't pose much threat to plants or exposed materials. However, the gas is quite poisonous to humans and other air-breathing creatures that need oxygen. Hemoglobin, the protein in blood that carries oxygen from the lungs to cells throughout the body, is more than 200 times more prone to bind with carbon monoxide than it is with oxygen. This means that someone who breathes too much CO can have their hemoglobin become saturated with it, making it impossible for the blood to deliver oxygen to their cells.

Carbon monoxide is often a product of incomplete combustion. If there is too little oxygen, or too much carbon, present when something burns, the burning produces carbon monoxide (CO) instead of (or as well as) carbon dioxide (CO2). Improperly ventilated kerosene lanterns and stoves can generate dangerously high carbon monoxide levels in enclosed spaces.

Since CO takes longer to mix completely throughout the troposphere than a typical CO molecules survives (before being oxidized to CO2), carbon monoxide exhibits locally elevated or depleted concentrations in the vicinity of sources (places where it is created or released into the atmosphere) or sinks (places where it is destroyed or removed from the atmosphere) respectively. Worldwide measurements of CO concentrations can, therefore, help to locate sources and sinks of this gas.

Carbon monoxide indirectly contributes to the buildup of some greenhouse gases in the troposphere. It reacts with certain chemicals that would otherwise destroy methane and ozone, thus helping to elevate the concentrations of methane and ozone.

Although the CO molecule is shown in the figure on this page as having a double bond, the bond in CO is somewhat unusual. The bond between the oxygen and the carbon atom is a bit of a hybrid that can be considered, at times, a single, double, or triple bond.

Carbon monoxide is found beyond Earth as well. It has been detected in gaseous nebulae, in the atmospheres of other planets, and in the ices of comets. 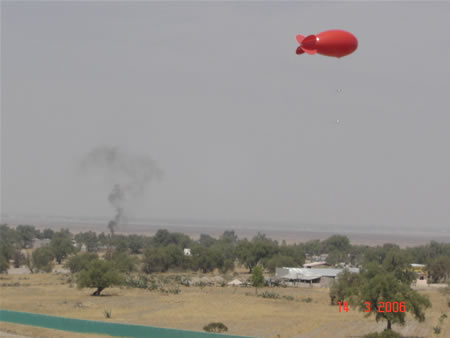 Sometimes, during a field campaign, things happen that could alter the field gas and particles measurings. For instance, this image belongs to fire started by people who lived nearby. The fire produces...more 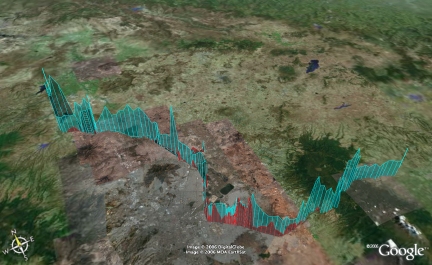 Pollutants on the Ground

The CMET balloon group launched two balloons on March 18 which had very successful flights. The balloons were purposely brought down as they approached US airspace over the Gulf of Mexico. By doing 'soundings'...more