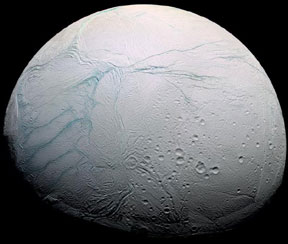 This picture of Enceladus was taken by Cassini. The moon's South Pole is towards the left side of the picture. Can you see the "Tiger Stripes" there?
Click on image for full size
Image courtesy NASA/JPL/Space Science Institute.

Movie about the Discovery of Geysers on Enceladus (12.9 Mb QuickTime)

Cracked ground on the southern hemisphere of Enceladus

The ice crystal geysers of Enceladus

Enceladus is a moon of Saturn. It is Saturn's sixth largest moon. Saturn has moons. Enceladus was discovered in 1789 by William Herschel (who also discovered the planet Uranus). It is mostly made of ice. It is pretty close to Saturn. It is actually inside of one of Saturn's rings!

Most of what we know about Enceladus comes from two spacecraft - Voyager and Cassini. The icy surface of Enceladus is very bright, like fresh snow. It reflects more light than any other moon in the Solar System! Scientists think they have discovered giant geysers of ice crystals on Enceladus. Maybe the geysers keep the moon covered with fresh ice, making it shiny.

The area near the South Pole on Enceladus is strange.. The ground there is cracked. Some of the cracks are called "Tiger Stripes". In some places near the pole, the ice is much warmer than on the rest of the moon. Some scientists think there is liquid water under the surface of Enceladus. They think that water shoots up through the cracks, making geysers. The geysers might be a bit like "Old Faithful" in Yellowstone Park. The geysers on Enceladus shoot out cold water or ice crystals instead of hot water, though.

Enceladus has a very thin atmosphere. The atmosphere is thickest near the South Pole. The ice geysers probably make the atmosphere. Some of the ice from the geysers flies away from Enceladus. The moon is small and doesn't have very strong gravity. The ice goes into orbit around Saturn. It makes up one of Saturn's rings.

There are only four places in our Solar System that have volcanoes or geysers. Enceladus may be one of them. The others are Earth, Jupiter's moon Io, and maybe Neptune's moon Triton. The cracked ground on Enceladus looks like the surfaces of Europa and Ganymede. Those are two ice moons of Jupiter. Enceladus is a very interesting moon! If there is water under the surface of Enceladus, some scientists wonder whether there might even be life there!

The name "Enceladus" is from Greek mythology. Enceladus was a giant. He was one of the children of Gaia. He fought against the Greek gods. A goddess named Athena killed him. He was buried under a volcano!