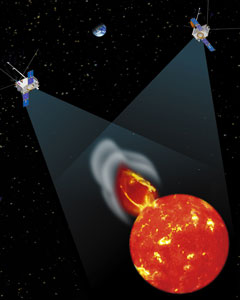 The STEREO space mission has two spacecraft. Each spacecraft has a different view of the Sun. Scientists can put together pictures from the two different viewing angles. They can make 3D views of the Sun and of space weather "storms" this way.
Click on image for full size
Image courtesy of NASA/Johns Hopkins University Applied Physics Laboratory.

3D picture of the Sun from STEREO

3D picture of Coronal Loops on the Sun from STEREO

You know, of course, that certain conditions in the Earth's atmosphere can cause powerful storms like thunderstorms, blizzards, tornadoes, and hurricanes. The Sun also has an atmosphere, and incredible...more

The ACE spacecraft consists of a two-deck irregular octagon, about 1.6 meters (65 inches) across and about 1 meter (40 inches) high. Eight of the scientific instruments which measure a variety of particle...more

Astronauts Eugene Cernan and Harold Schmitt were the last humans to walk on the Moon, in the final mission of the Apollo space program. Together with Ronald Evans, they lifted off on Dec. 7, 1972 aboard...more

COSPIN is one of the instruments on the Ulysses spacecraft. COSPIN stands for the COsmic and Solar Particle INvestigation. The COSPIN instrument is actually made up of 5 different sensors: the Dual Anisotropy...more

With increased confidence from the success of their Sputnik missions, the Soviet Union launched 24 Luna spacecrafts to the Moon, between 1959 and 1976. 15 were successful, each designed as either an orbiter...more