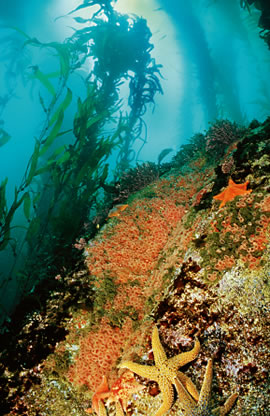 The ocean supports a great diversity of life and ecosystems.

Fundamental Concept 5a.
Ocean life ranges in size from the smallest virus to the largest animal that has lived on Earth, the blue whale.

Fundamental Concept 5b.
Most life in the ocean exists as microbes. Microbes are the most important primary producers in the ocean. Not only are they the most abundant life form in the ocean, they have extremely fast growth rates and life cycles.

Fundamental Concept 5d.
Ocean biology provides many unique examples of life cycles, adaptations and important relationships among organisms (symbiosis, predator-prey dynamics and energy transfer) that do not occur on land.

Fundamental Concept 5e.
The ocean is three-dimensional, offering vast living space and diverse habitats from the surface through the water column to the seafloor. Most of the living space on Earth is in the ocean.

Fundamental Concept 5f.
Ocean habitats are defined by environmental factors. Due to interactions of abiotic factors such as salinity, temperature, oxygen, pH, light, nutrients, pressure, substrate and circulation, ocean life is not evenly distributed temporally or spatially, i.e., it is patchy. Some regions of the ocean support more diverse and abundant life than anywhere on Earth, while much of the ocean is considered a desert.

Fundamental Concept 5g.
There are deep ocean ecosystems that are independent of energy from sunlight and photosynthetic organisms. Hydrothermal vents, submarine hot springs, methane cold seeps, and whale falls rely only on chemical energy and chemosynthetic organisms to support life.

Fundamental Concept 5h.
Tides, waves and predation cause vertical zonation patterns along the shore, influencing the distribution and diversity of organisms.

Fundamental Concept 5i.
Estuaries provide important and productive nursery areas for many marine and aquatic species.