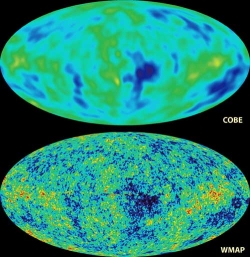 A detailed view of the Cosmic Microwave Background from WMAP, compared to the original view from the COBE satellite.
Click on image for full size
NASA/WMAP Science Team

In the 1960's a startling discovery was made by accident. A pair of scientists at Bell Laboratories detected some annoying background noise using a special low noise antenna. The strange thing about the noise was that it was coming from every direction and did not seem to vary in intensity at all. They had discovered the Cosmic Microwave Background Radiation.

This radiation fills the entire Universe and is no stronger or weaker in any direction. It has only tiny fluctuations that were only detected by the very sensitive space craft the Cosmic Background Explorer, COBE. This radiation is believed to be a clue to the Universe's brilliant beginning, known as the Big Bang.

More recently, the Wilkinson Microwave Anisotropy Probe (WMAP) team has made a more detailed full-sky map of this oldest light in the universe. The WMAP image brings the COBE picture into sharp focus, and provides firm answers to age-old questions. WMAP resolves slight temperature fluctuations, which vary by only a few millionths of a degree. These new data support and strengthen the Big Bang and Inflation Theories.

There is a radiation that fills the universe, called Cosmic Microwave Background Radiation (CMB). CMB radiation is the heat left over from the time after the Big Bang, when the universe was really hot!...more

Some of the best news of the week is that the Microwave Anisotropy Probe (MAP) was launched successfully last Saturday! Liftoff on its Delta II rocket occurred on time on June 30, 2001. The MAP teams says...more

The Oldest Light in the Universe

NASA scientists have taken a "snapshot" picture of the oldest light in the universe. The picture shows what is left of light given off during the big bang. The light is over 13 billion years...more