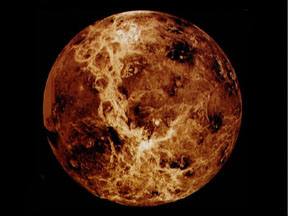 Venus is one of the brightest objects in the sky, so it is clearly visible to the naked eye. It can be tricky to spot because it is always near the Sun. Because of this, it rises and sets with the Sun each day. Ancient civilizations believed they were actually two different objects, so they called the one which rose the Morning Star, and the one which sets the Evening Star. Of course, we now know it's the same object!

No one knows who really discovered Venus, since it is so obvious in the sky. However, much has been discovered about Venus in the past century. Robert Richardson noticed that Venus rotates "backwards". In other words, on Venus the Sun rises in the west and sets in the east.

Even today we are still exploring our neighbor planet. In 1990, the Magellan spacecraft began mapping the surface of Venus. The spacecraft revealed volcanos, craters and the absence of water.

Venus Inside and Out

Venus is the hottest planet in our Solar System. On Earth, places near the equator are much warmer than places near the poles. On Venus, it is really hot everywhere... even at the North and South Poles....more

The following may be the history of Venus. Venus formed about 4 Billion Years ago. at the conclusion of forming it continued to be bombarded with leftover material. Many planets still bear the remains...more