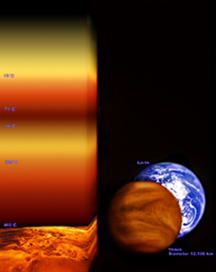 This is an artist's rendition of a column of clouds on Venus. The temperature of the different layers is shown at the left.
Click on image for full size
Windows to the Universe original image

Can there be Life in the Environment of Venus?

Venus is very hot, almost 800 degrees (Fahrenheit) at the surface. Venus also has a very heavy atmosphere. With a heavy atmosphere, there is a lot of pressure (about 91-94 times sea level pressure on Earth). A sophisticated life form such as a human-being would need a heavy shell for protection, just as humans going to great pressures under the sea need a submarine. Venus also has corrosive clouds of sulfuric acid.

We know, however, that there are life forms on earth which can survive in very harsh environments. Bacteria and very simple plant life can survive in unexpected places.

Because of the very high temperature, pressure, and corrosive atmosphere the environment of Venus seems unfriendly toward life as we know it on earth. More exploration of Venus is needed to determine if life was once present there.