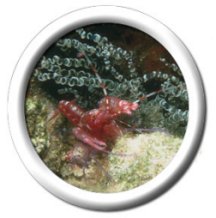 Crabs aren't the only crustaceans in the sea! Barnacles are small, rounded animals generally found on rocky reefs or shores. They are also seen attached to boats.

Barnacles have a hard shell, and use their 'feet' to capture small animals called plankton that swim in the oceans. They usually live in large groups, and are sometimes covered up by other sea life. Most barnacles look like rocks, but some, like the Short-stalked Goose Barnacle, are much prettier.

Shrimp are also crustaceans. Like crabs, shrimp live near rocks and reefs. They have a longer body rather than a round one, and range from less than an inch to 6 inches in length. Grabham's Cleaner Shrimp has a very important job. It attracts fish with its white antennae and legs. When the fish gets close, it grabs the fish and removes parasites and cleans the fish!

There are many other types of crustaceans, like prawns and lobsters.