The open ocean, called the pelagic zone, is the largest area of the marine ecosystem. It extends from the coasts to the middle of the ocean and includes all areas above the ocean floor. The living things that survive in the open ocean need to have a way to float or swim in ocean water.

Animals, protists, plants, and bacteria that float or drift in the open ocean instead of swimming are called plankton. They are moved around the open ocean by surface currents and wind.  Phytoplankton are types of plankton that do photosynthesis like diatoms and other algae. Zooplankton are animals and one-celled protozoa that drift in the ocean water. Many zooplankton eat phytoplankton. Some zooplankton eat other types of zooplankton. Many are able to propel themselves only short distances through water to catch prey.

Animals that are able to move through the water are called nekton. In the open ocean there are many types of swimmers including fish, whales and other marine mammals, and sharks. Some fish, such as herring and tuna, swim in schools while others are solitary.  Swimming in a school offers some protection from predators. Some nekton have other ways of moving besides swimming. For example, squid propel themselves through the ocean with a jet of water and flying fish are able to glide just above the water surface at up to 40 miles per hour using fins shaped like wings.

In the parts of the open ocean below where light can penetrate, there are fish and other living things like the elusive giant squid. Because there is no sunlight, there are no algae to start food chains. Instead many animals living in the deep ocean rely on the bodies of dead animals falling from the water above for food. 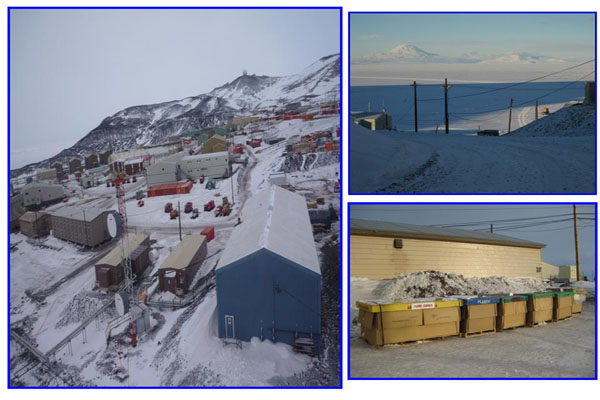 McMurdo Station in Antarctica gives one the impression of an impermanent, transient establishment nestled at the base of volcanic cinder cones, an isolated ice civilization at the edge of the unknown....more