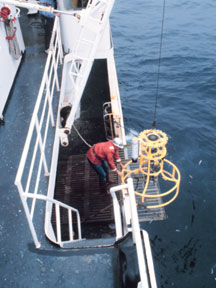 This scientist is preparing to lower a suite of instruments over the side of research ship. These instruments measure various aspects of ocean chemistry.
Click on image for full size
Image courtesy of NOAA, photograph by Captain Robert A. Pawlowski.

Earth's oceans are, of course, full of water. That water is not, however, simply pure H2O. Ocean water is a complex chemical soup that contains various salts and other compounds.

Ocean water is clearly quite salty. Sodium chloride (NaCl), which we know as table salt, is the main type of salt in the oceans. Sea salt also contains various other chemicals, including magnesium, sulfate, calcium, and potassium. Most of the salt in the seas comes from minerals on land. Rainfall on land dissolves minerals in rocks; streams and rivers carry those dissolved salts to the sea. As water evaporates back out of the oceans, it leaves the minerals behind. Over the course of many centuries, this cycle gradually created the salty seas we have today.

The salinity of the oceans is not uniform throughout. For example, areas where glaciers calve and melt provide infusions of fresh water, lowering ocean salinity. Salinity also varies with depth. Because it is salty, ocean water freezes at a lower temperature than fresh water; this affects the formation of sea ice. Salt content also alters the density of ocean water, which actually drives some major ocean circulation patterns. The average salt content of sea water is about 3.5%.

At least two chemicals that are important greenhouse gases in the atmosphere are also present in the oceans. Large amounts of carbon dioxide (CO2) are dissolved in ocean water. CO2 in water makes carbonic acid, so increasing levels of dissolved carbon dioxide in the oceans are a concern. The pH of ocean water typically ranges between 7.5 and 8.4. Acidification of ocean water has harmful effects on corals, shellfish, and many other marine organisms. Large amounts of methane are trapped in ices in sediments on the sea floor. Should these ices melt as ocean temperatures increase, the sudden release of methane into Earth's atmosphere would dramatically increase greenhouse warming. Some mass extinctions in the past may have been at least partially caused by such sudden methane releases.

Living creatures, including humans, influence the chemistry of the oceans. Excess fertilizers get washed downstream into the seas, adding nitrogen compounds to the oceans. This influx can cause massive plankton blooms, which in turn deplete the oxygen content of vast areas of the ocean. That can kill off many fish, crabs, and shellfish. Some plankton emit sulfur-bearing compounds, which waft into the air to form aerosols that influence global climate.