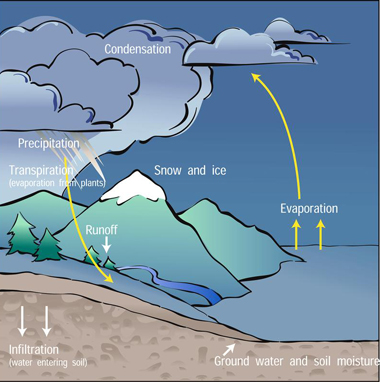 Once upon a time, the rain falling today was in the ocean. At other times it was snow that covered a high mountaintop.

Water is always moving around the planet. Water can be in the atmosphere, on the land, in the ocean, and even underground. It is recycled over and over through the water cycle.  In the cycle, water changes state between liquid water, ice, and water vapor.

Water that is at the top of the ocean, rivers, and lakes turns into water vapor in the atmosphere by the process of evaporation. Water vapor can also form from snow and ice. It can also evaporate from plants.

The water vapor rises in the atmosphere and cools. The cooler temperature turns the water vapor into tiny water droplets by a process called condensation.  Those water droplets make up clouds. The water droplets grow larger when they combine with each other. In time, they become too heavy to stay in the air. Then they fall to the ground as rain, snow and other types of precipitation.