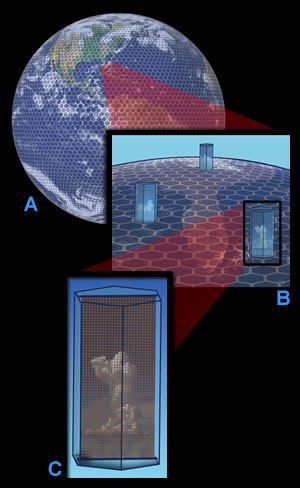 CMMAP (pronounced "see-map") stands for the Center for Multi-Scale Modeling of Atmospheric Processes. CMMAP is developing a revolutionary new approach to climate modeling that will help us to better understand the roles clouds play today and in the future as our climate changes. Climate model grid cells are usually about the size of the state of Delaware. The problem with modeling clouds is that they are much smaller than this, and there could be thousands of clouds in an area the size of Delaware at any given time.

One solution that CMMAP scientists are working on is to make the grid cells small enough to simulate clouds. This has been done using cells the size of city blocks. Although these models simulate very realistic clouds, they are very slow. Even the fastest computers in the world are too slow to simulate global climate with city-block-sized cells. Someday this will be possible, but that is probably decades away.

We need better climate models today, so CMMAP is developing a radical new approach that bridges the gap between the city-block-sized grid cells and the Delaware-sized grid cells. This "middle ground" involves adding small grid cells to a tiny fraction of each Delaware-sized cell, which provides a representative sample of the grid cell rather than including all of the information involved.

The links below have more information about the CMMAP project, how CMMAP is helping people teach and learn about climate, and the science of clouds and climate modeling.