The temperate forest biome is found in regions where there is large difference in temperature between winter and summer. Regions with this climate are generally found in the mid-latitudes, far from both the equator and the poles. Tropical rainforests are in regions that are consistently warm all year long, close to the equator.

Temperate forests are almost always made of two types of trees, deciduous and evergreen. Deciduous trees are trees that lose their leaves in the winter. Evergreens are trees that keep their leaves all year long, like pine trees. Forests can either have deciduous trees, evergreens, or a combination of both. Another kind of forest is a temperate rain forest. These are found in California, Oregon and Washington in the United States. These forests are made of redwoods and sequoias, the tallest trees in the world.

The amount of rainfall in an area determines if a forest is present. If there is enough rain to support trees, than a forest will usually develop. Otherwise, the region will become grassland.

"The Pantanal has the greatest concentration of fauna in the Americas. People outside Brazil know only the Amazon. . . it's a shame because the Pantanal is a very important ecological place." -- Dr. Maria...more 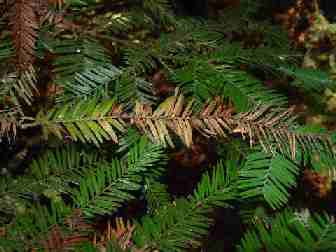 Redwood trees are the tallest trees in the world, but even they are at risk of getting the deadly fungus called Sudden Oak Death (SOD). The trees grow in Northern California, can reach heights of more...more 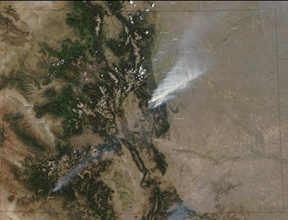 Wildfires are Burning in the Western United States

There are 19 large wildfires burning over 550,000 acres in the United States (as of June 13, 2002). Most of the fires are within western states such as California, Utah, Colorado, New Mexico, Wyoming and...more