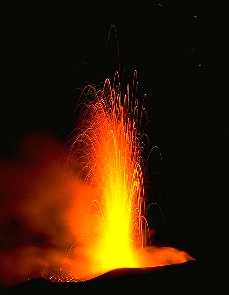 Lava is the word for magma (molten rock) which is extruded onto the surface of the Earth. Upon being released from the magma chamber and cooling, lava solidifies into rock. The term lava is used to describe active flows, solidified deposits, and fragments hurled into the air by explosive eruptions.

Lava coming out the the volcano's mouth can flow at widely varying speeds. Lava flows normally move at speeds between 2/3 and 1/3 mi/hr. Lava in a tube or channel can flow quite a bit faster, usually topping out around 23 mi/hr. A normal walking speed is 2-4 mi/hr, while an athlete can run the 100 meter dash at just about 23 mi/hr. In other words, lava flows can usually be walked away from, but you should still be careful.

Earth was still very hot at this time, like a bubbling pot, and there was a lot of volcanic activity. Thus the surface of the Earth was covered with igneous rocks, there was no ocean, and no continents....more