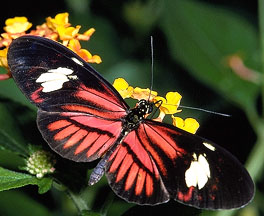 This pretty postman butterfly was once an ugly caterpillar.
Click on image for full size
Courtesy of Corel Photography

The title of this page is a little deceiving. We will also talk about arachnids, centipedes and other "tiny creatures" of the rain forest. So, let's get started!

The most feared and well known spider in the world resides in the jungle. Tarantulas are one of the creepiest animals you will ever see. Most species of tarantula have poisonous fangs for killing prey and for protection. Although some are life-threatening to humans, others are harmless.

Army ants are just one species of ant in the rain forest. They are called army ants because they march in a long, thick line through the jungle. They only stop when the young larvae reach pupil stage. Once the queen lays its eggs, the ants start marching again!

Beautiful butterflies fill the forest, but at one time these insects weren't so pretty. Butterflies start out as caterpillars, which tend to be a tad on the ugly side. They go through metamorphosis, which is the process of changing into a butterfly. Centipedes aren't so lucky. They don't turn into butterflies, but instead roam the forest looking for food. Some centipedes use poison to kill their prey.