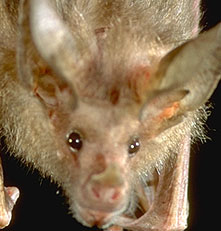 Birds aren't the only creatures that fly through the rain forests! Several species of flying mammals live in the jungle. From the harmless fruit bat to the unique flying squirrel, the tropical rain forests are full of surprises!

The Indian flying fox is one of the largest bats in the world. Its wings can spread out to 5 feet in width! Unlike bats in other parts of the world, these bats do not live in caves. They prefer to hang in trees during the day. Hundreds or even thousands of bats can be spotted in a single tree!

Vampire bats live in the Amazon jungle in South America. The famous stories of blood-sucking bats probably originated here. These bats do in fact drink the blood of their victims. They usually attack farm animals, but have also enjoyed the blood of humans. But don't worry, vampire bats only drink a very small amount of fluid. They won't kill you, or turn you into a vampire!