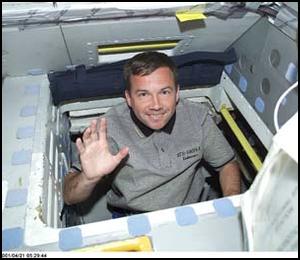 The shuttle Endeavour lifted off into space on April 19, 2001. Onboard are 7 astronauts from all over the world. Commander Kent Rominger and Pilot Jeffrey Ashby are from the United States as are mission specialists Scott Parazynski and John Phillips. The other mission specialists are Yuri Lonchakov from Russia, Umberto Guidoni from Italy, and Chris Hadfield from Canada. The shuttle docked with the International Space Station (ISS) on April 21, 2001.

Already, the crew has performed 2 spacewalks outside the shuttle and ISS. The new Canadian-built robotic arm was attached to the ISS during these spacewalks. This arm is even longer, more flexible and more capable than the shuttle's robotic arm. This new arm will really be able to reach out and help with ISS construction, assembly, and maintenance, cutting down on the number of EVA's that would have to be performed by astronauts. EVA's or extravehicular activity are the spacewalks that astronauts have to perform outside of the shuttle or ISS. They can be tiring, time-consuming and somewhat dangerous.

Endeavour also carried with it the Italian-built Raffaello logistics carrier. Raffaello is really a space-age moving van. This time, Raffaello carried 2 more experiment racks that have been installed in the Destiny laboratory. Now there are 3 full racks of experiments in the ISS lab. Unwanted items from the ISS are being loaded onto Raffaello and will be brought back to Earth when Endeavour returns on April 30, 2001. 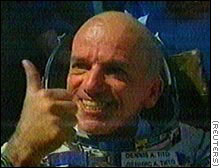 Expedition Three's stay onboard the International Space Station (ISS) is coming to a close. Commander Frank Culbertson, Pilot Vladimir Dezhurov and Flight Engineer Mikhail Tyurin have been onboard the...more