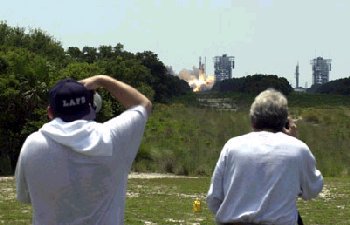 On August 8, 2001, NASA launched the next of its robotic space missions: The Genesis mission. Genesis had a perfect launch aboard its Delta II rocket from Cape Canaveral. Everything with the mission continues to go smoothly. The Genesis spacecraft is now traveling toward the Sun and will assume an orbit around L1, a position in space where the gravitational pulls from the Earth and Sun are balanced.

Once in position, the Genesis craft will open collector arrays and begin to capture particles that make up the solar wind. These particles are tiny, charged bits of matter than have been expelled by the Sun. In April, 2004, after almost three years of collecting material, the spacecraft will return to Earth. The collected solar material will be recovered in a dramatic, mid-air helicopter capture, so that the impact of landing does not damage the samples. The Genesis mission will be the first mission to collect and return material from beyond the orbit of the Moon.

Studying these particles should help answer fundamental questions about the exact composition of the Sun and about the birth of our solar system. The mission should provide enough material to last for decades of research, which means that further studies of the Sun and its composition will also be possible.