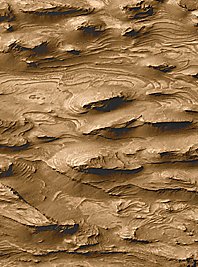 Right now, we think of Mars as just a bunch of dry rocks. But, "these images tell us that early Mars was very dynamic and may have been a lot more like Earth than many of us had been thinking," says Malin. Malin is one of the principal investigators of the MGS program. He added, "I have not previously been a vocal advocate of the theory that Mars was wet and warm in its early history. But my earlier view of Mars was really shaken when I saw our first high- resolution pictures of Candor Chasma. The nearly identically thick layers would be almost impossible to create without water."

But, these observations are only one piece in a very big puzzle. Some scientists think that the layers within these sedimentary rock formations are so prominent because Mars was actually a lot colder and drier 3.5 billion years ago, allowing for more dust to be airborne and thicker layers to be formed.