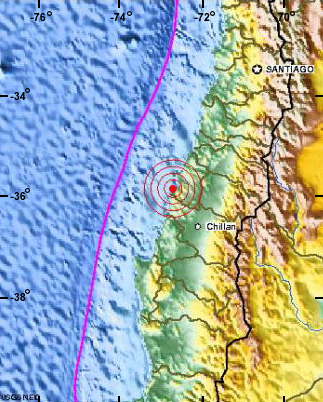 Location of the epicenter of the magnitude 8.8 earthquake that struck February 27, 2010.
Courtesy of USGS

What is an Earthquake?

Where do earthquakes happen?

What is a Tsunami?

The magnitude of this earthquake was strong enough to break buildings and bridges into rubble. The earthquake epicenter was not far from the large cities of Santiago and Conception, Chile. About 1.5 million people have lost their homes in coastal Chile because of this earthquake, according to the director of Chilean emergency management office.

The earthquake happened as Earth's tectonic plates moved along a plate boundary. In this area, two plates are moving towards each other over time. Each year, they move about 8 cm (3.2 in) closer. Where does the extra rock go? One plate is sliding below the other, a process called subduction.

This is not the first earthquake to rock coastal Chile. Because it is so close to the boundary between two tectonic plates, the area has a long history of earthquakes. Thirteen large earthquakes, magnitude 7.0 or higher, have shaken the area since 1973. Because this area is prone to earthquakes, buildings are designed to be very sturdy. So, even though this earthquake was stronger than the one that struck Haiti a month ago, the total destruction is likely to be much less.

Plates at our planets surface move because of the intense heat in the Earths core that causes molten rock in the mantle layer to move. It moves in a pattern called a convection cell that forms when...more