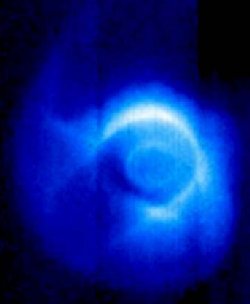 The IMAGE (Imager for Magnetopause -to- Aurora Global Exploration) spacecraft was launched on March 25, 2000. IMAGE has been studying the Earth's magnetosphere, the region about the Earth that contains the Earth's magnetic field. IMAGE is the first spacecraft to actually "see" the charged particles that make up the magnetic field surrounding Earth. Just recently, pictures like the one to the left were released. These pictures show the Earth's magnetosphere including a tail-like structure. A magnetotail had been predicted over 30 years ago, but confirmation was left until now.

IMAGE has six instruments onboard that work together to photograph the plasma captured in the magnetosphere. They make it possible to "see" a lot of the magnetosphere at one time, in different wavelengths. "IMAGE is providing for the first time global views of the Earth's charged-particle populations at multiple wavelengths and energies on time scales of a few minutes, which is sufficient to track the dynamics of the magnetosphere," said Dr. James Burch, IMAGE Principal Investigator.

The magnetosphere of the Earth acts as a shield against the possibly dangerous solar wind particles that flow from the Sun. That is why the magnetosphere is shaped like a tear-drop - the solar wind pushes and distorts it into this shape. But sometimes, explosive events on the Sun can charge the magnetosphere with energy that causes geomagnetic storms. These storms can have harmless effects like causing the auroral lights or they can have severe effects like damaging satellites or power grids on Earth. So, the IMAGE mission is essential in studying and coming up with ways to forecast space weather which affects life on Earth.

The NEAR spacecraft has been in orbit around the asteroid Eros since Valentine's Day of last year. It has met all of its science goals. It has been a huge success within NASA's low-cost planetary exploration...more