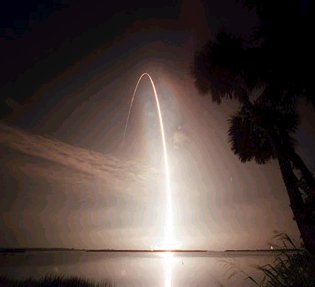 Shuttle Atlantis streaks across the black, morning sky as it lifted off from the coast of Florida heading out over the Atlantic Ocean.
Click on image for full size
Courtesy of NASA

The Shuttle Atlantis lifted off in the early, morning hours on Thursday, July 12th. The shuttle roared into the sky with a new and improved block II engine. Working together with the shuttle's other two engines, this new engine will provide an even safer, more reliable ride for the shuttle. Each of the three main engines that lift the shuttle into orbit is 14 feet long, weighs about 7,000 pounds and is 7.5 feet in diameter at the end of the nozzle.

Atlantis is scheduled to dock with the International Space Station (ISS) later tonight. Once docked, two mission specialists from the shuttle mission, Mike Gernhardt and Jim Reilly, will perform three spacewalks to install a new Joint Airlock onto the station. This new component of the station will allow for future, more easily accesible spacewalks from the ISS.