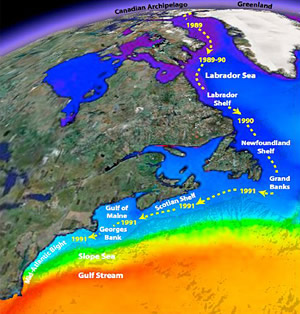 Ecologists and oceanographers are attempting to predict the future impacts of climate change by reconstructing the past behavior of Arctic climate and ocean circulation.

In a November special issue of the journal Ecology, a group of scientists report that if current patterns of change in the Arctic and North Atlantic Oceans continue, alterations of ocean circulation could occur on a global scale, with potentially dramatic implications for the world's climate and biosphere.

"This research presents a compelling example of how climate change has altered marine ecosystems," said David Garrison, director of the National Science Foundation (NSF)'s Biological Oceanography Program, which funded the research. "It illustrates the value of basic research in understanding the underlying mechanisms and consequences of rapid climate change."

Charles Greene of Cornell University and colleagues reconstructed the patterns of climate change in the Arctic from the Paleocene epoch to the present.

Over these 65 million years, the Earth has undergone several major warming and cooling episodes, which were largely mitigated by the expansion and contraction of sea ice in the Arctic.

"When the Arctic cools and ice sheets and sea ice expand, the increased ice cover increases albedo, or reflectance of the sun's rays by the ice," says Greene, the lead author on the paper. "When more of the sun is reflected rather than absorbed, this leads to global cooling."

Likewise, when ice sheets and sea ice contract and expose the darker-colored land or ocean underneath, heat is absorbed, accelerating climate warming.

Currently, the Earth is in the midst of an interglacial period, characterized by retracted ice sheets and warmer temperatures.

In the past three decades, changes in Arctic climate and ice cover have led to several reorganizations of northern ocean circulation patterns.

Since 1989, a species of plankton native to the Pacific Ocean has been colonizing the North Atlantic Ocean, a feat that hasn't occurred in more than 800 thousand years. These plankton were carried across the Arctic Ocean by Pacific waters that made their way to the North Atlantic.

"When Arctic climate changes, waters in the Arctic can go from storing large quantities of freshwater to exporting that freshwater to the North Atlantic in large pulses, referred to as great salinity anomalies," Greene explains. "These GSAs flow southward, disrupting the ocean's circulation patterns and altering the temperature stratification observed in marine ecosystems."

In the continental shelf waters of the Northwest Atlantic, the arrival of a GSA during the early 1990s led to a major ecosystem reorganization, or regime shift. Some ocean ecosystems in the Northwest Atlantic saw major drops in salinity, increased stratification, an explosion of some marine invertebrate populations and a collapse of cod stocks.

"The changes in shelf ecosystems between the 1980s and 1990s were remarkable," says Greene. "Now we have a much better idea about the role climate had in this regime shift."

The changes observed in recent decades are only the tip of the iceberg. Previous interglacial periods have ended when the global ocean's deep circulation slowed in response to reductions in the formation of North Atlantic Deep Water, or NADW, a large, deep mass of highly saline water in the North Atlantic.

At these tipping points in the Earth's history, NADW formation was disrupted by pulses of freshwater entering the North Atlantic. The slowing of the global ocean's deep circulation results in less heat being transported to higher latitudes, accelerating ice formation and advancing the Earth into glacial conditions.

Recent modeling studies show that NADW formation will likely be resilient to freshwater pulses from the Arctic during the 21st century, according to the authors.

Continued exposure to such freshwater forcing, however, could disrupt global ocean circulation during the next century and lead to very abrupt changes in climate, similar to those that occurred at the onset of the last ice age.

"If the Earth's deep ocean circulation were to be shut down, many of the atmospheric, glacial and oceanic processes that have been stable in recent times would change, and the change would likely be abrupt," says Greene.

"While the ecosystem consequences of gradual changes in the ocean are somewhat predictable, all bets are off after such abrupt changes occur."