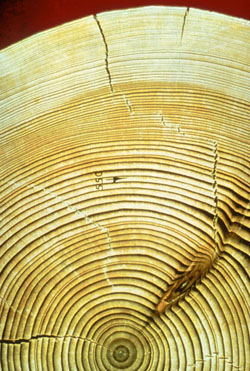 Paleoclimates: Climates of the Past

Climate change has affected the Earth throughout its 4.6 billion year history. The Earth has repeatedly warmed and cooled and the changes affected the types of environments on Earths surface and the organisms that could survive.

Evidence of past climate change comes from many sources. The sediments deposited millions of years ago provide a record of ancient environments. Thin layers of mud and sand that form at the bottom of lakes record seasonal changes. Bubbles of ancient air trapped inside glacial ice record the characteristics of the atmosphere. Fossil plant pollen and tiny marine plankton provide clues the temperatures in the oceans and on the land. Tree rings show what climate was like over the life of the tree. The scientists who decipher these clues to ancient climates are called paleoclimatologists.

If climate has always changed, then why is global warming such a concern today? Humans are adding large amounts of greenhouse gas to our atmosphere by burning fossil fuels. This change in the concentration of greenhouse gases is increasing the speed of global warming. The rate of change today is increasing so rapidly that scientists are concerned that life on Earth, including humans, will not have time to adapt to the changing conditions.

An abrupt release of methane, a powerful greenhouse gas, from ice sheets that extended to Earth's low latitudes some 635 million years ago caused a dramatic shift in climate, scientists funded by the National...more