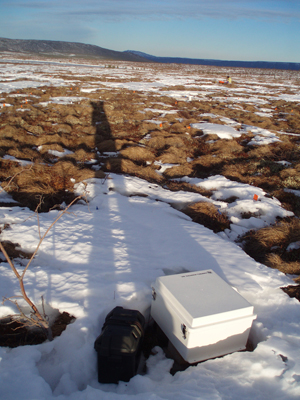 In 20 years of studying the Alaskan tundra, scientist Ted Schuur and his team have seen the frozen soil in their study area thaw, turning from hard ground to soft mud.

All over the Arctic, frozen soil, called permafrost, is thawing because of global warming. The team studied how the plants and soil change as permafrost thaws. Recently they have been developing new ways to monitor how thawing soil affects greenhouse gases in the atmosphere.

There is a large amount of carbon stored in the permafrost. The carbon built up in the soil over thousands of years from the remains of dead plants and animals which couldnt decompose in frozen conditions. Today, as the soil thaws, carbon can be released into the atmosphere, increasing the amount of greenhouse gases.